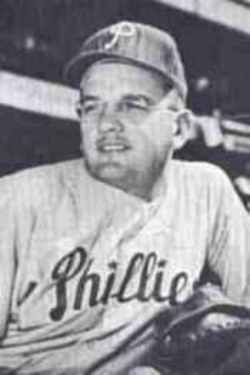 Wall of Fame Voting began for this years enshrinement into Phillies immortality. As I looked at the nominees something stood out to me. MVP and Whiz Kid Jim Konstanty is still on the ballot and not on the wall. This is a terrible oversight. Konstanty is the only relief pitcher ever to win the MVP award and he did it in a season where he helped lead the Phillies to one of their only five World Series appearances.  Get out there and vote Konstanty in. He belongs on that wall!

I also voted for John Kruk and first time nominee Jim Fregosi. Get on the web site and place your votes today! 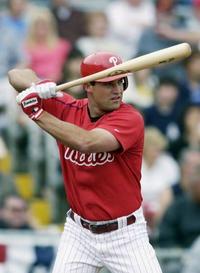 Burrells future will the Phillies is a question mark after 2008 but has stated on numerous occasions that he hopes to spend his entire career in Philadelphia. Ask ten Phillies fans if they want him back and you will get ten different rationalizations on the subject. It will be discussed throughout the season as Pat’s contract comes closer to an end.

The wait is over, Jimmy Rollins is the National League Most Valuable Player for 2007.

17 points separated Rollins from Colorado’s Matt Holliday and the votes went as follows. 32 ballots were submitted by two writers in each league city. Rollins was
listed first on 16, second on seven, third on four, fourth on four and fifth on
one for a total of 353 points. Holliday’s breakdown was 11 first-place votes, 18
seconds, one third, one fourth and one sixth for 336 points.

This was a well deserved award for a guy who declared his team the team to beat last winter. As a Phillies fan, you hope he declares the Phillies the 2008 world champions this winter and follows through like he did in 2007!

Charlie Manual finished second in the voting for NL manager of the year. Despite the heat he takes from the media, especially talk radio in Philadelphia, the Baseball Writers Association of America decided that Manual

deserved 76 points and beat out Clint Hurdle for the runner up position behind Arizona’s Bob Melvin. Everyone has an opinion on Charlie from his in game moves to the way he speaks, but the bottom line is the players love him and the team won the division for him. It will be interesting to see how he and the team do next season with the added pressure of being defending division champions. Below are the results of the voters.

Chase Utley and Jimmy Rollins won the 2007  Louisville Silver Slugger Awards for their positions. Utley hit .332 with 22 homers and 103 RBIs.

He produced these numbers even after missing over a month with a broken hand. This was the second year he won the award. Rollins hit 296 with 30 homers and 41 stolen bases. He became only the 32nd player in major league baseball to join the 30/30 club.

For Rollins the hope is that the Gold Glove he won earlier in the week and the Silver Slugger Award are just appetizers for him being named National League MVP.

become the first players in 50 years to have at least 20 doubles, triples, homeruns, and stolen bases in a season. That announcement will take place November 20.

The combination of Ryan Howard, Chase Utley, and Jimmy Rollins perhaps make up the best offensive infield in baseball even for a team that does not have a legitimate third baseman. Imagine if the Phillies can get third base squared away? The collective infield may set records that no one will break for years to come!

Jimmy Rollins and Aaron Rowand won gold gloves for their outstanding play in the 2007 campaign. For Jimmy Rollins this is an honor he has deserved for some time. Sadly a players offensive contributions have weight in the decision of who wins the award. Both players truly deserved the honors this year! Congratulations Jimmy and Aaron!