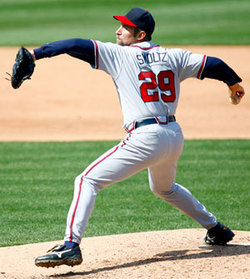 Atlanta Braves ace John Smoltz was scratched from his latest start because of stiffness in his pitching shoulder. The injury is not thought to be serious but any time a 40 year old pitcher is hurting this early in the season, it is not good. With Mike Hampton always a question mark, the Braves have some concerns going into the season. Smoltz is still scheduled to start next Wednesday against the Washington Nationals.

Smoltz could begin the season on the disabled list and be eligible to
be activated in time to make his first start April 6 against the Mets.
That would be the first day during the season that Cox would have to use a five man rotation.

For all of the latest on your favorite teams and rivalries, check out MyTeamRivals.com.

Mets left fielder Moises Alou and Braves starter Mike Hampton suffered injuries as both teams have had more than their share of Spring injuries. The Mets need to keep their team healthy this season as they traded many of their prospects from what was already a thin farm system. Alou will require surgery and be out until at least May. Omar Minaya has dismissed the idea of acquiring Barry Bonds or Sammy Sosa and said, "It’s fair to say we’ll go with someone internal right now." Angel Pagan, Brady Clark, and Endy Chavez were players considered although the team likes Chavez as a 4th outfielder. The Mets have no position player of interest in their farm system for a trade other than Fernando Martinez who has been called untouchable. Left handed pitcher Jonathan Niese could attract interest but with Orlando

Hernandez a question, Jason Vargas unable to pitch and
Tony Armas Jr. not even in camp, the Mets have no depth in their
starting rotation. Other Mets injuries include Brian Schneider (tight right hamstring), first baseman Carlos Delgado
(right hip impingement) second baseman Luis Castillo (recovering from
October surgery on both knees), center fielder Carlos Beltran
(recovering from October surgery on both knees) and Church, who
suffered a concussion in an exhibition game. Not a good start for an aging team with players with a history of injuries.

The Braves strength going into 2008 is their pitching as their offense will not be able to compete with the Phillies or Mets. Hampton pulled a groin muscle and is day to day but with his history of injury it makes him more of a question mark. Also after not pitching for so long, he needs these outings to rebuild his arm strength if he wishes to pitch a full season.

The Washington Nationals have been bitten by the injury bug this Spring. Pitcher Shawn Hill has been sidelined indefinitely with right forearm tightness while catchers Johnny Estrada, sidelined with tendinitis in his left shoulder, and Paul Lo Duca, recovering from offseason knee surgery, continue to try to return. Dmitri Young injured his left side swing a bat and will miss a few games while Aaron Boone is getting to play his first game returning from left knee surgery. Finally, Shawn Hill’s forearm injury came up negative on an MRI and he will go for a second opinion.

Ryan Zimmerman hit is first Spring homerun while he and and Lastings Milledge have been off to strong starts. Pitcher John Patterson threw without pain while Steven Shell was impressive in a start against the Astros. The Nationals could be more competitive than they are being given credit for. It 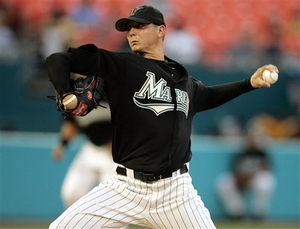 will be interesting to see how many games they win this year.

The Marlins seem to be headed for a dismal season but they have a nice core of young prospects that could build a strong team for them by the time they move into their new ballpark. The team will be solid up the middle with Dan Uggla and Hamley Ramirez. Ramirez is ok after a scary collision in a game against the Cardinals.

Phillies hater Scott Olsen looked solid in his first tow starts. Olsen seems poised to have a good year. Ramirez, Uggla, Cantu, and Willingham are all off to good starts.

As has been stated before in this blog, in order for the Mets to win, they need everything to go there way. A team with a lackluster bench and barren farm system, they need their veteran players to remain healthy and produce. A big blow came to that plan when Carlos Delgado had pain in his hip from impingement in the socket. Although it is not as serious as it was first thought to be, considering the age of Delgado and the nature of the injury which usually gets worse from use, it is plausible to believe it will hinder him all season and cause him to miss time and not be as effective as he was several years ago. Delgado saw a drop in homeruns and RBI’s to a level he has not been since 1995. He also only hit .258. Delgado may at best only do the same in 2008 if his hip is bothering him.

Johan Santana got his first taste of the heat in New York when he was roughed up in his first outing. It will be interesting to see how the move to New York will effect the pitcher. Many have come and failed because they could not handle the fans and media. 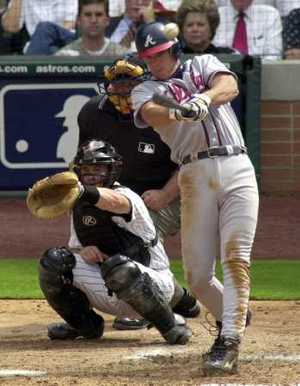 The Braves had a pair of lefty’s pitch well. Tom Glavine pitched two innings and gave up one hit, a homerun. Glavine looked good in his return to Atlanta although he said he was nervous. In bigger news Mike Hampton pitched two shut out innings today and hopes to be a big contributor to the 2008 Braves. If Hampton can stay healthy and be effective, the Braves could be in the thick of things right into September. His fastball hit 93 on the radar gun so there is no reason to think he can not be the same pitcher he was before injuries.

Atlanta’s bats have been fairly quiet so far while and one of the teams biggest guns Chipper Jones pulled a hamstring. Although he says in is "no big deal" we all know that a hamstring injury can nag a player for quite some time. Jones missed time in 2004 with a hamstring injury but claims this injury is not as bad. The team needs Jones as he and Mark Teixiera are expected to provide the bulk of the teams offense.

The owners started the season 5-0 in arbitration cases but have now had their second defeat in a row. Oliver Perez won his salary arbitration case against the Mets on Friday
and will be paid $6.5 million this year rather than the team’s offer of
$4,725,000. Perez earned $2.425 million and went 15-10 with a 3.56 ERA last season. An up and down pitcher, it will be interesting to see if he can put two good years in a row together.

Francisco Rodriguez had his case on Thursday and is still waiting for the decision. He asked for a
raise from $7.1 million to $12.5 million. The Angels argued for $10
million.

For all of you that hoped the Marlins would move to San Antonio and they with the Braves would move to the NL Central while the Pirates and Reds came to the NL East, sorry but it is not going to happen. The Marlins came to an agreement after eight years of trying to construct a new ballpark on the site of the Orange Bowl. The county owned facility will have 37,000 seats, including 3,000 club seats and 60 suites and a retractable roof. Another part of the agreement locks the Marlins in Miami for 35 years and will obligate them to change their name to the Miami Marlins.

The Marlins also agreed to make available a total of 81,000 seats during
each season at no more than $15, and agreed to give away 5,000 seats
each season to youth charities. "This is the final piece of the puzzle," said Marlins owner Jeffrey Loria, who thanked a long
list of city and county officials for "saving baseball in Miami." Hopefully the economic situation will turn from this and the Marlins will be able to put together a team with a payroll that can remain competitive. Of course for Phillies fans we hope, not too competitive.

Jimmy Rollins responded to Carlos Beltran’s proclamation of the Mets being the team to beat. "One, there are four other teams in our division who
are going to make sure that doesn’t happen, and two, has anyone ever heard of plagiarism?
That was pretty good, especially coming from him. He’s a quiet guy, so it was probably
shocking when he said it. Not shocking in a bad way, like ‘Wow, I can’t believe he said
that.’ More like, ‘Wow, he finally said something because he’s a leader on that team and
you definitely need to be a vocal leader.’" Plagiarism seems to be the only thing the Mets players can do when speaking to the media. There has been nothing original from them other than discussing what J-Roll says since his prediction last winter.

J-Roll also said,
"We can 100 games. Look at what happened last year with all the injuries, different
pitchers and uncertainties, and we wound up winning 89 games. There’s a number of things
that went wrong, and we still found a way to win 89 games. Offensively, we haven’t lost
anything. We’ve actually taken a step forward. Pitching-wise, with Brett back in
the rotation and Lidge coming back to being the closer he was, we can seal the
deal." 100 games would certainly win the NL East.

The rivalry is on! The Phillies are on! Repeating as NL East Champions is on! Bring on the Mets and the rest of the NL!